From Cave Rock to Desktop: The History of Infographics 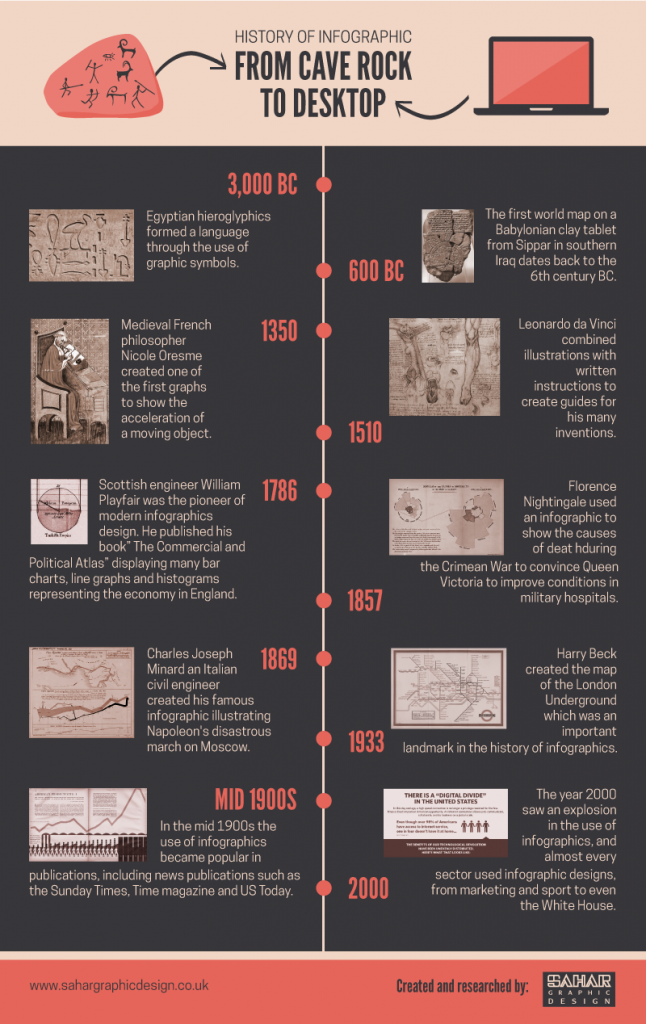 In the very beginning pictures were used as a way to communicate (which we still do after 35,000 years) and these cave paintings were the world’s first infographics.

Through the centuries human beings continued using visual representations to illustrate the story of life, science, religion, engineering and politics with what we categorise as infographics today.

Egyptian hieroglyphics from 3,000 BC are a good example of early infographic use which formed a language through the use of graphic symbols.

The first world map on a Babylonian clay tablet, from Sippar in southern Iraq, dating back to the 6th century BC, is another good example.

In 1350 Medieval French philosopher Nicole Oresme created one of the first graphs to show the acceleration of a moving object.

By the end of the 1700s modern charts including time series, line and bar charts had been invented already. Scottish engineer William Playfair was a pioneer of modern infographic design during this time period. He published his book “The Commercial and Political Atlas” in 1786 displaying many bar charts, line graphs and histograms representing the economy in England.

During the 1800s data visualisation techniques had improved and many new ways of visualising data invented, such as pie charts, time-series plots, bubble charts and contour plots. In 1857 Florence Nightingale used an infographic to show the causes of deaths in each month of the Crimean War to convince Queen Victoria to improve conditions in military hospitals.

In the 1900s data visualisation was used in different fields and started to become popular among the masses. In England, Harry Beck created the map of the London Underground network in 1933 which was an important milestone in the history of infographics.

In the mid-1900s the use of infographics became popular in publications, including some news publications such as the Sunday Times, Time magazine and USA Today.

The year 2000 saw an explosion of infographics use and almost every sector used infographic design, from marketing and sport to even the White House.

Today, infographics are used in many different shapes from static images to interactive, animated and video infographics. Who knows what will be next for infographics design.

Copyright © 2021 SaharGraphicDesign.
All images are copyrighted to their respective owners.